Where and what is Bare Island?

On Monday we started shooting Modern Curve for Ezibuy in and around Sydney. Today is day three and it was still dark for our 5.30am call time. It was a beautiful day spent on the foreshores of Sydney – it was warm, sunny and windy.

Our location was Bare Island, La Perouse. It is a small island south-east of Sydney, not far from Botany Bay. The historic military fort and tunnels can be visited by guided tour and the waters around the island are popular with scuba divers. The island was featured in Mission: Impossible II… Who knew? There is also a nudist beach within walking distance to enjoy if that is your thing.

Sydney – Our hair & make-up station in our location van

Our location van stood out like a sore thumb in the parking lot and immediately became our base camp. Abby Valdez and I had our hair and make-up done by Richard Kavanagh and Linda Jefferyes respectively, before we trekked down to the footbridge and waters edge to start shooting for the day.

There were many people coming and going, mainly on foot. Occasionally, the islands visitors would stop and take in what the Ezibuy, Modern Curve team were shooting and doing. We saw people from all over the world interested in seeing the old military fort up close.

We went about our business, oblivious mostly to the stares and interest of others. There were scuba divers, fisherman, tourists and cyclists. Bare Island is a busy place it turns out to be.

A couple of my favourite pieces were a blue pair of skinny jeans and a black pair of pants with zipper detail. There is a lot of colour in the Modern Curve Winter catalogue. 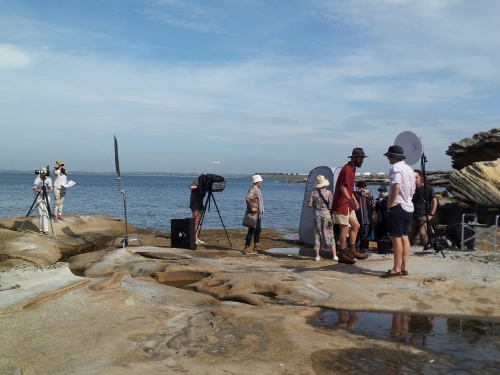 Bare Island – The crew in place for the next shot

Have you ever been to Bare Island?