Since my last post I’ve been a very busy bee. I’ve traveled and worked in Milwaukee and Minneapolis for most of the week or so in-between. Time escapes me and before I know it, I’m in the here and now and it’s the eve before Thanksgiving. It’s probably the biggest public holiday in the U.S. of A and I am yet to get my head around hosting this traditional event. So here goes…

I did mange to squeeze some family time over the weekend however – I took Mila to the Radio City Christmas Spectacular (The Rockettes in all their glory and precise splendor). It was amazing. We both loved it and it was our first time to the show for both of us. Mila and I both highly recommend it. We had orchestra seats and we saw it all before our eyes. It was fabulous. 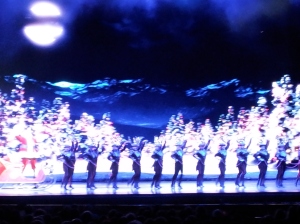 The show was truly a spectacular and it was so precise and the dancers were in exact time. Mila, I and the hundreds who saw the show that session simply loved it. We were blown away.

Afterwards, we enjoyed the delicious Magnolia Bakery only blocks from where we were. Mila selected her six favourite cupcakes for her, Levi and our guests due later that day. What can I say other than yum and gone! A must on the New York City circuit. Remember the scenes in Sex and the City? If not, go back and revisit.

The Toy Soldier routine was simply amazing. It took minutes for all of the dancers to fall down gracefully and rhythmically. It was one of the best choreographed routines I’ve seen ever seen and coming from an ex-dancer that’s something! I was left speechless.

Before I know it, six loads of laundry later, whilst frantically packing for my work trip, I hop on a plane from JFK for an almost three-hour flight to work. Once I arrive, I’m then privileged to a wonderful catch-up with Barbara Bricker for a few days. Whilst we were working together, one of the many things we spoke about and discussed at length was Thanksgiving dinner. Barb helped me come up with my menu and traditional dinner fare for the holiday. I was most thankful and grateful. It is my first time hosting the entire event so it was important to get it right. A work in progress I must say as I emailed my darling husband Steve the shopping list.

Minneapolis – Barbara and I

Minneapolis -Beri Smithers and the gang

After we finish our shoot, four of the six models were heading home to New York. We rushed to our cars and headed to the airport. As soon as I got in my car with Beri, I took off my make-up and called home. The picture below is me negotiating with my four and two-year olds to eat their wonderful dinner that our nanny Isabel had made for them. It’s a hard sell.

Beri, who was riding with me in the car starts laughing and takes the picture below. Her words to me were, ” From supermodel to super negotiator”. She is not wrong. Beri Smithers’ too is a supermodel and she was one of the first straight-sized models I ever met when I moved to New York. She is a rock star and I love her so. 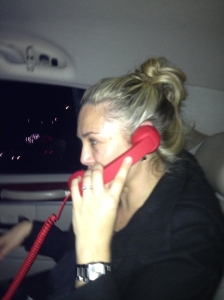 Minneapolis – In the car on the way to the airport

I arrive home by midnight and am so tired my eyes are bloodshot. I cannot wait to get to sleep however, it takes me a very long time. I have Thanksgiving dinner to prepare and host and for that, I am geed up! My next installment will be me hosting me first ever Thanksgiving dinner… Success or failure to come!