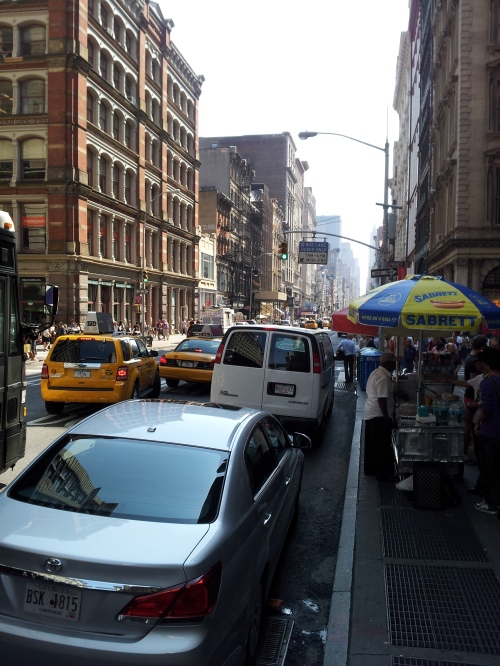 Yesterday I went to Cutler Salon in SoHo and on my way back to the subway stop, I saw something I’ve seen many times before however, was reminded of how funny, weird and odd it was. Hollister California (on the corner of Broadway and Houston) is a brand that describes itself as, ‘Classical, preppy style with an effortless attitude’. It is a brand for young, hot, tanned, pretty, cool dudes and chicks that evoke the ideal Californian beach lifestyle.

I smiled to myself as I looked around me at all the tourists not only doing a double-take but staring in disbelief, shock and at times amusement at what they saw. Two hot, early twenty somethings were standing outside the store’s entrance in nothing but a pair of red board shorts and a pair of havaianas on their feet. They were greased up and their taught, tight abs appeared rubber-like.

The dudes were simply standing there to meet and greet customers – to lure customers in to the store. It was attention grabbing at its best – using sex to sell. This time it wasn’t the girls in their bikinis however, the guys were stripping down and appeared to be enjoying it.

The companies other big brand, Abercrombie & Fitch approaches ‘privileged prep’ with flesh also. A&F’s greeter’s have hot, college school boy looks and wonderfully wicked athletic bodies. For some it’s all a little too much, for others – bring it on! I’m never one to shy away from eye candy however, I’m not always wanting their flesh in my face either.

What do you think?

Is it OK for men to use their sex to sell and not just women?

Where do we draw the line?