Blizzard Nemo – How do I get home?

I was on my way to Newark airport on Thursday afternoon when the driver of the Town Car mentioned the blizzard and storm heading our way to the Northeast the following day. He was asking about my trip and when I was due home. I told him the following night. He strongly suggested I check in with my travel agent as flights were being cancelled left, right and center. I had no idea! Where had I been hiding?

I called my booker at Ford and whilst I was on the phone to her, Delta called to inform me that my connecting flight from Atlanta to New York was cancelled on Friday night. It was on… Nature against me!

My travel agent changed my itinerary immediately. I had to get home on Friday night for a number of reasons. One of which, it was my husband’s birthday and we had made plans to celebrate and secondly, I didn’t want to be away from my family when crazy events like this occurred. We had to be together… No matter what.

So before I reached my hotel in Arkansas last Thursday night, a second flight had been cancelled. It was time to scramble. I asked if I could get home to New York via Amtrak (train) and my travel agent changed my itinerary for the third time. Nearly 3000 flights had been cancelled on Friday in the New York area alone. If I couldn’t fly home… I would have to find other means. 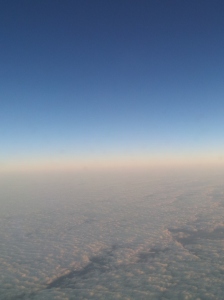 I ended up flying from Little Rock, AK to Washington, DC. My flight was on time and surprisingly it wasn’t full. I thought heading to the Northeast area would have been a hot mess. I kept checking and asking the airline if everything was on time and OK… Everything went smoothly and without any hiccups. I was so happy! Could this be for real? An impossibility turned into a simple reality?!

When I arrived in Washington, DC, I made my way via taxi to Union Station to catch an Amtrak train to Penn Station. I arrived two hours early and fortunately, managed to get on an earlier train. Two hours make a big difference at that time of night.

On route to New York, the train was packed and there was no evidence of snow, blizzard or storm until I reached Philadelphia (approximately 90 minutes before my final destination). It was incredible seeing and noticing the change in topography. My journey home was almost four hours on the train alone. Fortunately, it went by quickly. I spent a long part of my day traveling to get home.

An anthropologist sat next to me and we chatted most of the way to the Big Apple. She was an interesting woman. I love it when things like that happen so randomly and organically. I really enjoyed meeting Jill and discussing life, technology and family. 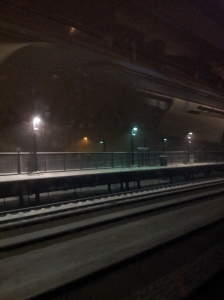 On a train going from Washington, DC to New York, NY

Once I arrived at Penn Station, NY, I hopped on the subway and made my way home to Brooklyn. The following two pictures I took whilst trying to walk home. The snow was pelting down and sideways. I could hardly see where I was going. It was 1am and hardly a soul on the street. It was exciting in a crazy way. I was so happy to be home… I was about to see my husband who was waiting up for me and I got to kiss my angels whilst they slept. Nothing else mattered. I was home, miraculously.

Brooklyn, NY – Out of the subway and onto the street

Brooklyn, NY – 1am and Blizzard Nemo is still in full swing

Have you ever been stranded somewhere because of a natural disaster?

What did you do?